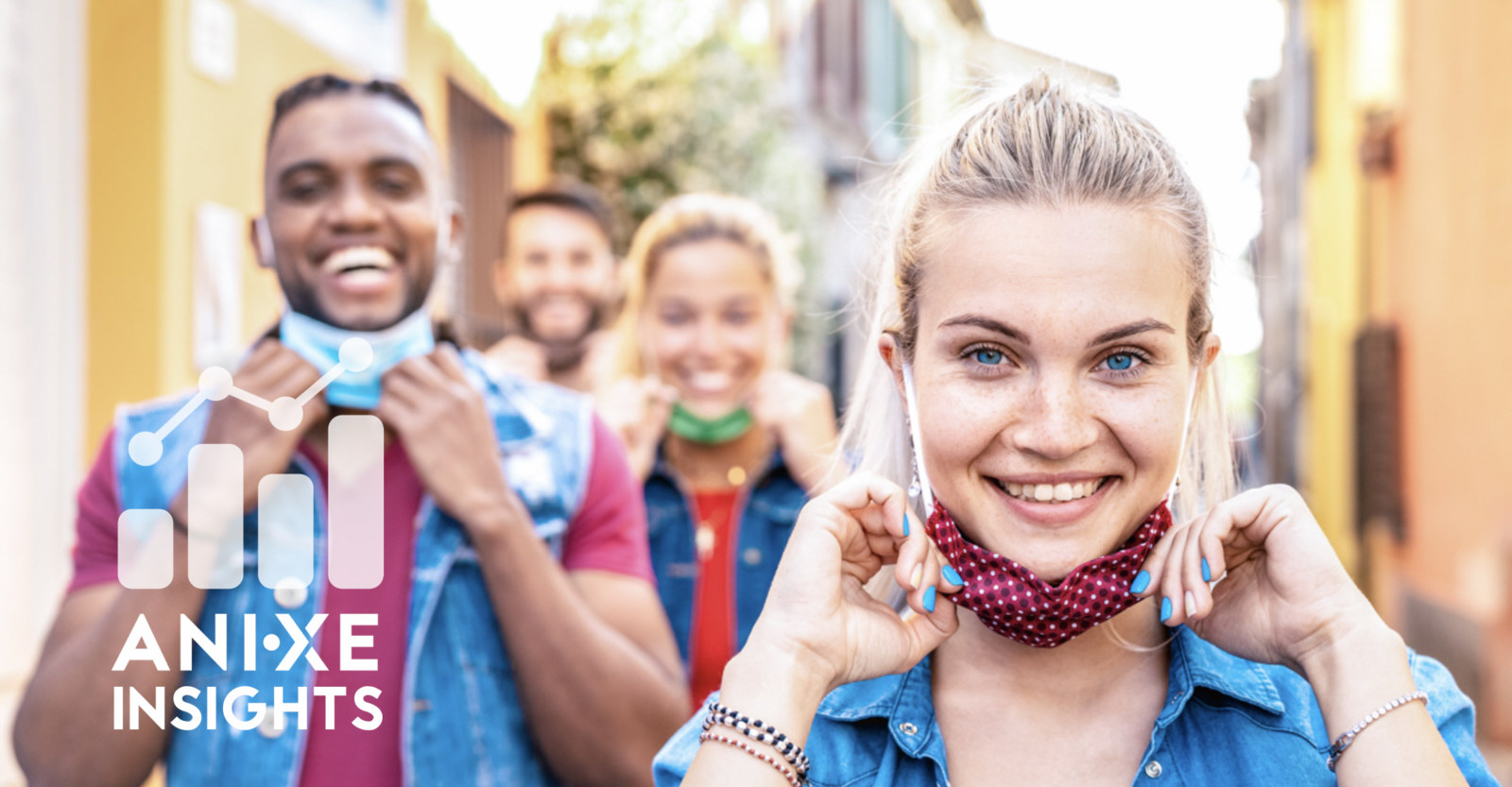 The third wave that attacked the world turned out to be much stronger than expected. The virus has mutated. Unfortunately, now we become infected more quickly, and sometimes a lot more severely. We've seen people getting different forms of gut-related infections and digestive system complications, and the infection has hit the younger age ranges harder than before. It certainly doesn't look like more of the same. This has been quite a scary evolution.

And though infection and mortality numbers are through the roof compared to a year ago, we're no longer panicking. This is Covid Y2Q1, and we've done everything but invite the virus over for dinner. People have thankfully gotten mentally used to it. We can thank human design for that. As we've all come to terms that covid's not going anywhere for some time, we've planned our lives with covid in mind according to medical advice, historical data and personal choice.

The production and roll-out of several different vaccines across the globe have given some people hope of a quick fix and has frightened others with images of a new totalitarian global initiative where privacy, choice and social freedom are a thing of the past.

Let's look At China today. Your infection /vaccination history on your mobile phone, soon on chips imbedded under your skin. One CCTV camera for every two people, with the goal of 1:1. An app that awards you for good social behavior, and deducts points for bad social behavior (at the moment, that includes breaking social distance, removing your mask or sliding it under your nose, spitting or sneezing in public, touching walls and other surfaces that aren't designated for that purpose, littering among other actions)

Without enough points, you couldn't eat at a restaurant, shop in a supermarket, drive your car, get on public transportation, go to a movie theatre, get on a flight to somewhere...or even leave your home.

The Chinese aren't complaining. They've been a communist nation since the dawn of time. This is just communism 5G for them. But how is the rest of the world reacting?

Weekly protests and marches take place in several European cities, sometimes clashing with police and security forces. Why? Because we've been taught that democracy is our way of life, and some of us see it slowly slipping out of our grasp. And that is scarier than Corona.

The ones that aren't too bothered about democracy can't wait for the world to get vaccinated so they can have their lives back. Fortunately for the travel industry, those represent the larger portion of people.

Many have started to plan vacations more boldly as countries open their borders and remove travel restrictions.

There are countries in which the percentage of people already booked a trip to somewhere has already reached double-digit figures. All this gives us hope. All the more so as these are not just hunches but also an actual, stable trend, as you'll see through the statistics we'll share with you today.

March was another month of steady growth in bookings. Although globally it accounts for less than 16% of March from 2 years ago, the trend for 2021 seems to be set. In the German market, the number of bookings rose by 57% in March compared to Feb during a period of prolonged lockdowns. And two seems to be a good prognosticator for the colorful future.

As lockdowns are removed and restrictions begin to loosen, international travel begins to resume. We've started to travel shorter distances, often with our own mode of transport. In addition to the sudden rise and fall in interest in local destinations, the Germans decided on Spain, Turkey, Egypt and Greece.

Compared to February, Greece, in particular, attracted a little more interest, but still its share of bookings exceeded the numbers from 2 years ago in the same period by 7 multiples. On the other hand, the USA and Canada seem to be still the most affected by the government's reflection of strict travel bans set in place. Simultaneously, the dizzying rate of vaccination in these countries indicates that the trend could rebound strongly in the coming months.

The receding winter has encouraged German travelers to make reservations in warmer Spanish resorts such as Palma de Mallorca, Las Palmas, Puerto del Rosario and Tenerife as well as other sunny beach destinations from spots like Hurghada, Antalya and Dubai.

In February, Heraklion, Perto del Rosario, Antalya and Gazipasa also enjoyed tremendous popularity, although their share decreased significantly later. We see similar trends with the hotspots of March 2019. Demand for bookings to London, Las Vegas, New York, Vienna and Rome fell significantly, and their booking share in Resfinity dwindled. The top destinations were stable: Palma de Mallorca and Hurghada. Their share in March's bookings was even higher, although on disproportionately lower volumes.

The four most popular destinations for German travelers are Hurghada, Istanbul, Side and Dubai.

The most significant percentage slump was in Hamburg, whose share in bookings dropped fourfold in March. Noteworthy, although Hamburg and Side’s share of all bookings was lower than in February, their quantitative volume did not weaken - in fact, it was at the same level or increased by 30% as for the latter place!

In contrast to the situation in January 2021, where trips of up to two days were very popular, March 2021 has proven to be a harbinger of change. The pandemic's current state has contributed. In January, German tourists made use of early booking offers, planning trips of 7-14 days in advance for the spring and summer seasons.

Business travel has been replaced by online meetings. This new reality is clearly visible in numbers compared to the same period in 2019 - i.e. before the pandemic. The percentage of bookings of up to 4 days, which reigned supreme in the systems then, is now less than half and has given way to slightly longer leisure trips.

There has been a significant change in the scale of business trips booked shortly before departure. The share of single business travelers has dropped dramatically, giving way to family bookings. While people can do business online, the hunger for leisure travel is reaching a breaking point. The spectre of a vaccine has given tourists a sense of security.

This is also confirmed by how reservations are made if we compare the figures with those from two years ago. Spontaneous business reservations or those related to last-minute offers has marginalized. The share of once very popular 15-60 day booking window has also dropped by an average of 35%. All this will likely return, although gradually. Now we plan more carefully and in advance. The change is entirely understandable. Good for everyone.

Covid has also influenced certain changes in eating habits. Compared to the situation in 2019/2021 the proportion of reservations with a more inclusive meal plan – AI, HB has increased significantly, which is understandable given the increase in the proportion of long-term reservations. It also reflects people’s concerns about eating out. Tour operators, agencies and OTAs aren’t accountable for the health and safety of restaurants outside the hotels.

As for pricing, we see significant global reductions in February 2021, and a fast rebound where they've started to catch up quickly. The battered hotel industry is trying to make up for 2020's losses and ultimately to survive. However, it does ever so sensitively and, in most cases, very gradually.

Nevertheless, we see prices are discounted around 15% compared to March 2019 to encourage purchases. It may be a good strategy given that the total value of global bookings exceeds 2019's values by up to 50%.

Last year's data and this year's direction, which has been consistently confirmed month after month, has clearly shown that the travel market has the potential to regenerate quickly. Demand for backlogged travel is vast. People no longer want to wait for their dreams. They want to enjoy exploring the world and new adventures again.

What awaits us soon? It promises to be a pleasant spring and hot summer. People willing to travel are growing by the number every day. More and more countries are opening up to tourists again. Nothing left but to get vaccinated and fly.

How fast will the tourism sector continue to grow? Which countries and resorts will offer the best deals for tourists? We look forward to bring you more data and more insights.